Acting Chair - Niki Solomon
Niki has had lupus symptoms since puberty but wasn’t diagnosed until 18 months after the birth of her daughter. It was a slow process, starting with hypothyroidism, Raynaud's, fatigue and extreme inflammation. Despite the debilitating effects of lupus Niki has built a business, Niki’s Soft Furnishings, in Plymouth and now employs a team of creative people. After ignoring the symptoms for 10 years, Niki joined LUPUS UK, beginning a journey of discovery and empowerment. Supported and encouraged to improve her own health, Niki now offers support to others. Her view is: ‘a rising tide floats all boats’ so by sharing knowledge, humour and compassion everyone can have a better experience despite the horrors of the disease.

Treasurer - Martin Elliott
Martin is a Certified Public Accountant. He started his own practice in 1983 but in 2008 took semi-retirement to work from home. Between them, Martin and wife Sue have four children and eight grandchildren. Martin is a keen gardener and loves most sports, still playing cricket and badminton given the chance. He enjoys watching Exeter Chiefs and Somerset CC. Martin has worked with and for many charities and good causes, is active within the Freemasons and is Treasurer of several other committees. Martin was diagnosed with discoid lupus in 2004 and became Treasurer of DCLG in 2013.
Other Committee Members
Susan Gutowski
Luke Hawkey
Chloe-Ann Roberts (Secretary)
Amy Witney​ 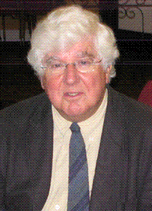 Dr Christopher Gardner-Thorpe MD FRCP FRCPE FACP
Christopher trained in medicine at St Thomas’ Hospital in London and then in neurology, holding the post of Consultant Neurologist at the Royal Devon and Exeter Hospital and working now as an independent Consultant Neurologist. He has lived in Devon for more than half his lifetime and has a wide interest in neurology, including the manifestations of lupus within the nervous system. He enjoys Dartmoor and spends much time there but also has commitments in teaching medical students in the Exeter University Medical School, mainly in the Humanities – medical history, medicine and the law, and medical writing. He also examines and directs the courses in medical history at the Society of Apothecaries, a livery company in London. 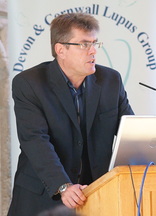 Dr David Hutchinson MD FRCP
David has been a rheumatology consultant at the Royal Cornwall Hospital Trust for over 15 years. He trained in rheumatology in Liverpool, where he was also a clinical lecturer. As clinical lecturer, David undertook his MD thesis on smoking as a trigger factor for rheumatoid arthritis. It is now established that cigarette smoking is the most important environmental risk factor for rheumatoid arthritis. David continues to do research and has supervised a specialist registrar in undertaking his MD as part of a ground-breaking multi-centre research project that identified lung disease can trigger the development of rheumatoid arthritis. On-going research supervised by David has identified that occupations involving exposure to cadmium can trigger rheumatoid arthritis.
David has been a member of the Arthritis Research UK USER committee that involves clinicians and patients with rheumatic conditions allocating funding for research into autoimmune conditions such as lupus. Leisure activities include watching his boys do cross-country and football (he has four boys) and walking the Cornish coast path. 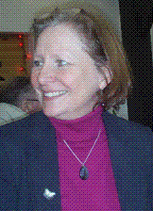 Alison Raynsford
Alison was Member of Parliament for Plymouth Moor View until 2015. She was a Shadow Defence and Housing Minister and Chair of the South West Regional Select Committee. During her time in Parliament she was a member of the All Party Group on Lupus and got to local events to support the work of the wonderfully active Devon & Cornwall Lupus Group. With the loss of the last Chairman, there is currently no APPG on Lupus. Since leaving Parliament Alison has continued her links to local charities and will use her experience to continue to press parliamentarians on issues of concern.
​